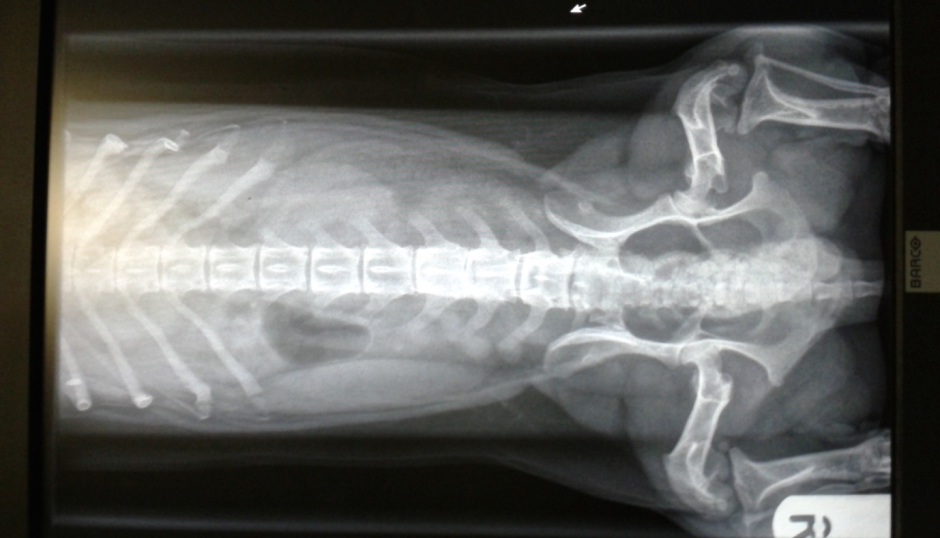 The intervertebral discs are are disc-shaped fibrous sacs fully of jelly-like material. They are found between the vertebrae and these act as shock absorbers and allow flexibility in the back. As dogs get older, the discs degenerate in all breeds of dogs, but in Dachshunds this happens at a much earlier age than other breeds. The degeneration can be seen on X-ray as calcification of the gel in the centre of the disc in Dachshunds as young as 12 to 18 months (Jensen and Ersboll, 2000). Symptoms of disc disease can appear soon after this.

The two main types of disc herniation are Hansen Type 1 and Type 2.

Back problems, specifically Intervertebral Disc Disease (IVDD), are thought by many people to be a result of the long backs creating mechanical problems, but Dachshunds actually have short legs, not long backs. The situation is more subtle than that and is, in part, due to the mutation that causes the short legs which also causes an abnormality in the biochemistry of the intervertebral discs.

The assessment of calcifications forms the basis of the X-ray Screening Programme which was developed in Scandinavia and is now available in the UK.

How come some dogs with no calcifications on X-rays can still go down with IVDD?

Calcifications are a symptom of the degenerative changes in the disc. Even if there are no calcifications detected by radiography, there is still a possibility that the disc is calcified and/or degenerated, consequently a risk of herniation exists.

Stigen and Kolbjørnsen (Acta Vet Scand in 2007) did histology and X-rays of 20 autopsied dachshunds. They refer to Hansen (1952): Hansen classified this type of disc disease as protrusion of type 1 and found chondroid degenerative changes of the disc with subsequent dystrophic calcification of the nucleus to be significant preceding factors.

When calcifications were proven by histology, only 60% of these were found by radiography. This is low sensitivity and, if the purpose was to make a prognosis for a specific disc to herniate, this would never be a scientifically acceptable level rigour to be useable.

The purpose of the screening programme is to select dogs for breeding with the lowest possible IVDD risk. For this purpose, it doesn't matter if the true number of calcifications is 5 or 9, the dog will not be recommended for breeding anyway.

In Scandinavia, Silja Lindh has collected the X-ray results of 3500 Dachshunds in her database and only 18% had 5 or more calcifications. The advice to breeders in Scandinavia is that dogs with 5 calcifications or more should be excluded from breeding programmes and this still leaves about 80% of the population to use for breeding.

There is variation in X-ray scores and the prevalence of IVDD across the different Dachshund varieties. Consequently, this gives us a good possibility for improvement. The aim is to reduce the risk of IVDD and X-ray screening is a simple, available and well-documented method.

How come calcifications can disappear as a dog gets older?

The following explanation is from Jensen & Arnbjerg's 2001 paper...

Development of Intervertebral Disk Calcification in the Dachshund:

In 62% of dogs aged 3 to 7 years and in 16% of the dogs aged 1 to 2.5 years, Havranek-Balzeretti observed the dissolution of disc calcification at subsequent examinations done when the dogs were 4 years or older.

Thus, dissolution of disk calcifications is a common phenomenon in dogs older than 3 years of age. Havranek-Balzeretti observed clinical signs of disc herniation in the majority (16/19) of these dogs, suggesting a phagocytic resorption of the intervertebral disc calcifications. Demineralization of herniated material has been ascribed to phagocytic activity of the related inflammatory process.