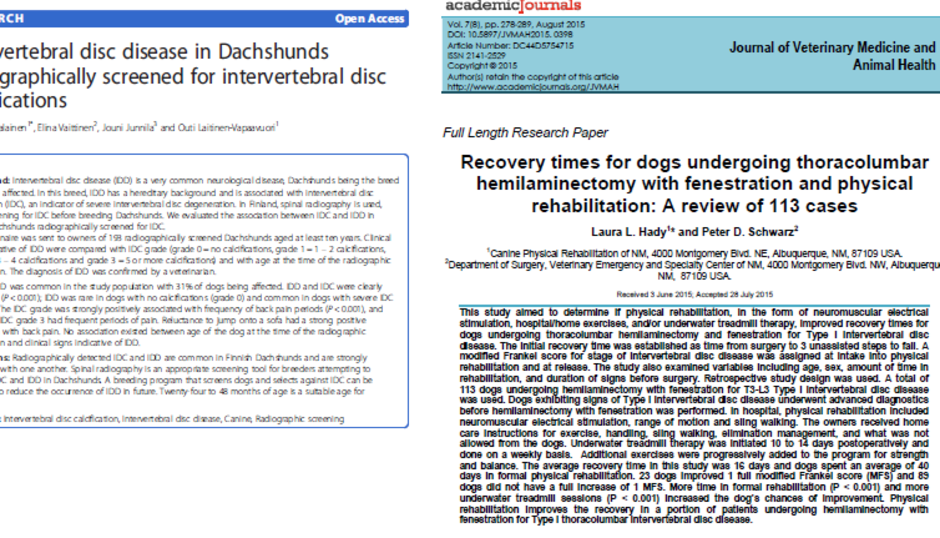 We have summarised research papers that are available as "Open Access". Links to the full paper are provided and they are presented with the most recent paper at the top of this page.

DachsLife 2015: an investigation of lifestyle associations with the risk of intervertebral disc disease in Dachshunds

Intervertebral disc disease (IVDD) represents a major problem in the Dachshund, with at a relative risk of IVDD 10–12 times higher than other breeds, and an estimated 19–24 % of Dachshunds showing clinical signs related to IVDD during their lifetime. A variety of genetic, physical and lifestyle-related risk factors for IVDD have previously been identified, with some conflicting findings. As such, advising owners and breeders regarding best-practice for IVDD prevention is challenging at present. This study aimed to (i) estimate prevalence of IVDD in six Dachshund varieties, and (ii) identify risk factors associated with IVDD diagnosis from a wide variety of demographic, conformational, dietary, activity and exercise-related variables.

A web-based survey “Dachs-Life 2015” was carried out from January-April 2015, with responses received for 2031 individual Dachshunds. Three-hundred and ten dogs were classed as Cases based on veterinary-diagnosis of IVDD, and 56 dogs were excluded from further analyses due to a lack of veterinary-diagnosis of their clinical signs. The remaining 1665 dogs with no previous signs of IVDD were classified as Non-Cases. The overall prevalence of IVDD was 15.7 % (95 % CI: 14.1–17.3). Breed variety was significantly associated with IVDD risk, with the highest prevalence seen in the Standard Smooth-Haired (24.4 %, 95 % CI: 22.5–26.3) and lowest in the Standard Wire-Haired (7.1 %, 95 % CI: 6.0–8.2). Older dogs and neutered dogs were at increased odds of IVDD. Of the lifestyle risk factors, univariable analysis identified dogs that exercised for <30 min per day, were not allowed to jump on and off furniture, or were supplemented with glucosamine or chondroitin were at increased odds of IVDD, whereas dogs that exercised for more than 1 h per day, that were considered highly or moderately active by their owners, and those that showed at Open or Championship shows were at decreased odds of IVDD.

In line with previous reports, IVDD is commonly diagnosed in the Dachshund, with significant differences in prevalence between Dachshund varieties. Lifestyle risk factors were identified which are hypothesis-generating for future prospective studies, and can inform an evidence-based approach to mitigating IVDD risk for Dachshund owners and breeders.

Intervertebral disc disease (IDD) is a hereditary condition particularly common in Dachshunds. The breed is predisposed to early intervertebral disc degeneration and intervertebral disc calcification (IDC). When calcified, these severely degenerated discs are visible in spinal radiographs. Since the number of calcified discs (NCD) is associated with IDD, spinal radiography can be utilized in screening programmes in attempts to diminish the incidence of IDD in Dachshunds. Our aims were to estimate the heritability and genetic trend of NCD in Dachshunds in Finland and to explore the effect of age at the time of radiographic screening. Since the NCD has a highly skewed distribution, a log-transformed NCD (lnNCD) was also used as an analysed trait. The variance components for both traits were estimated, using the restricted maximum likelihood method. The fixed effects of breed variant, sex, as well as year of screening and the random effects of litter and animal were included in the model. The genetic trends in the NCD and lnNCD were assessed from the estimated breeding values (EBVs) of individual dogs by comparing the mean EBV of dogs born in different years. The breeding values were estimated, using the best linear unbiased prediction animal model. The pedigree in the genetic analyses included a total of 9027 dogs, of which 1567 showed results for NCDs.

The heritability estimates of the NCD and lnNCD in Dachshunds were high (0.53 and 0.45, respectively). Small genetic improvements were seen as the mean EBVs increased from 100 to 104 and 105 over a 15-year period. The gain in the entire Dachshund population in Finland may differ from that observed, since less than 10 % of the Dachshunds registered have a screening result for NCD. Age at the time of the screening did not significantly affect the NCD or lnNCD.

Recovery times for dogs undergoing thoracolumbar hemilaminectomy with fenestration and physical rehabilitation: A review of 113 cases

IDD was common in the study population with 31% of dogs being affected. IDD and IDC were clearly connected (P < 0.001); IDD was rare in dogs with no calcifications (grade 0) and common in dogs with severe IDC (grade 3). The IDC grade was strongly positively associated with frequency of back pain periods (P < 0.001), and dogs with IDC grade 3 had frequent periods of pain. Reluctance to jump onto a sofa had a strong positive association with back pain. No association existed between age of the dog at the time of the radiographic examination and clinical signs indicative of IDD.

Radiographically detected IDC and IDD are common in Finnish Dachshunds and are strongly associated with one another. Spinal radiography is an appropriate screening tool for breeders attempting to diminish IDC and IDD in Dachshunds. A breeding program that screens dogs and selects against IDC can be expected to reduce the occurrence of IDD in future. Twenty-four to 48 months of age is a suitable age for screening.

How Long and Low Can You Go? Effect of Conformation on the Risk of Thoracolumbar Intervertebral Disc Extrusion in Domestic Dogs

Intervertebral disc extrusion (IVDE) is a common neurological disorder in certain dog breeds, resulting in spinal cord compression and injury that can cause pain and neurological deficits. Most disc extrusions are reported in chondrodystrophic breeds (e.g. Dachshunds, Basset Hounds, Pekingese), where selection for ‘long and low’ morphologies is linked with intervertebral discs abnormalities that predispose dogs to IVDE. The aim of this study was to quantify the relationship between relative thoracolumbar vertebral column length and IVDE risk in diverse breeds. A 14 month cross-sectional study of dogs entering a UK small animal referral hospital for diverse disorders including IVDE was carried out. Dogs were measured on breed-defining morphometrics, including back length (BL) and height at the withers (HW). Of 700 dogs recruited from this referral population, measured and clinically examined, 79 were diagnosed with thoracolumbar IVDE following diagnostic imaging ± surgery. The BL:HW ratio was positively associated with IVDE risk, indicating that relatively longer dogs were at increased risk, e.g. the probability of IVDE was 0.30 for Miniature Dachshunds when BL:HW ratio equalled 1.1, compared to 0.68 when BL:HW ratio equalled 1.5. Additionally, both being overweight and skeletally smaller significantly increased IVDE risk. Therefore, selection for longer backs and miniaturisation should be discouraged in high-risk breeds to reduce IVDE risk. In higher risk individuals, maintaining a lean body shape is particularly important to reduce the risk of IVDE. Results are reported as probabilities to aid decision-making regarding breed standards and screening programmes reflecting the degree of risk acceptable to stakeholders.

An association between the occurrence of calcified discs, visible on radiographic examination (CDVR), and disc extrusions has been suggested in published literature over the past 10-20 years, mainly from Nordic countries. It has also been postulated that dogs without CDVR would not develop disc extrusions. Furthermore, inheritance of CDVR has been calculated and it has been postulated that, by selecting dogs for breeding with few, or no CDVR, the prevalence of disc extrusions in the Dachshund population may be reduced.

The prevalence of radiographic detectable intervertebral disc calcifications was calculated from one hundred surgeries for disc extrusion, performed in 95 Dachshunds, in order to determine if the disc causing clinically significant IVDD, had radiographic signs of calcification at the time of confirmed disc extrusion. Inclusion criteria, for each dog, included a complete physical, orthopedic and neurologic examination, radiographs of the entire vertebral column, a myelogram or magnetic resonance imaging examination indicating extradural spinal cord compression, and finally a surgical procedure confirming the diagnosis of a disc extrusion. In addition to descriptive statistics, age correlation with number of calcifications visible at radiographic examination and with CDVR at the surgery site was examined.

We found that disc extrusions occur as frequently in discs that are found to have radiographic evidence of calcification as those discs that do not have signs of radiographic calcification, and that IVDD (intervertebral disc disease) requiring surgery does occur in the absence of any calcified discs on radiographic examination. We found that calcified discs were more frequent in our Dachshund population compared to previous studies suggesting that disc calcification might be a serious risk factor for developing disc extrusion. Further studies are needed to show, conclusively, if selection of breeding dogs based on CDVR in the Dachshund will reduce the incidence of IVDD. The presence of the calcifications of intervertebral disc should be evaluated with caution, as only part of the calcifications will be detected and the real extent of the disc degeneration may be underestimated.

Retrotransposition of processed mRNAs is a frequent source of novel sequence acquired during the evolution of genomes. The vast majority of retroposed gene copies are inactive pseudogenes that rapidly acquire mutations that disrupt the reading frame, while precious few are conserved to become new genes. Utilizing a multi-breed association analysis in the domestic dog, we demonstrate that a recently acquired fgf4 retrogene causes chondrodysplasia, a short-legged phenotype that defines several common dog breeds including the dachshund, corgi and basset hound. The discovery that a single evolutionary event underlies a breed-defining phenotype for 19 diverse dog breeds demonstrates the importance of unique mutational events in constraining and directing phenotypic diversity in the domestic dog.

Calcification of intervertebral discs in the dachshund: a radiographic and histopathologic study of 20 dogs

The purpose of the study was to compare radiographic and histopathologic findings with regard to number and extent of calcified discs in the dachshund.

The intervertebral discs of 20 dachshunds were subjected to a radiographic and histopathologic examination. The dogs were selected randomly from clinical cases euthanased for reasons unrelated to research at the Norwegian School of Veterinary Science. Lateral radiographs were taken of the vertebral columns after removing them from the carcasses. The histopathologic examination included 5 μm thick sections in the transverse plane, stained with hematoxylin-eosin and von Kossa. Radiographs and histological sections were evaluated independently.

A sensitivity of 0.6 and specificity of 1.0 for radiography was calculated when using histopathology as the gold standard.