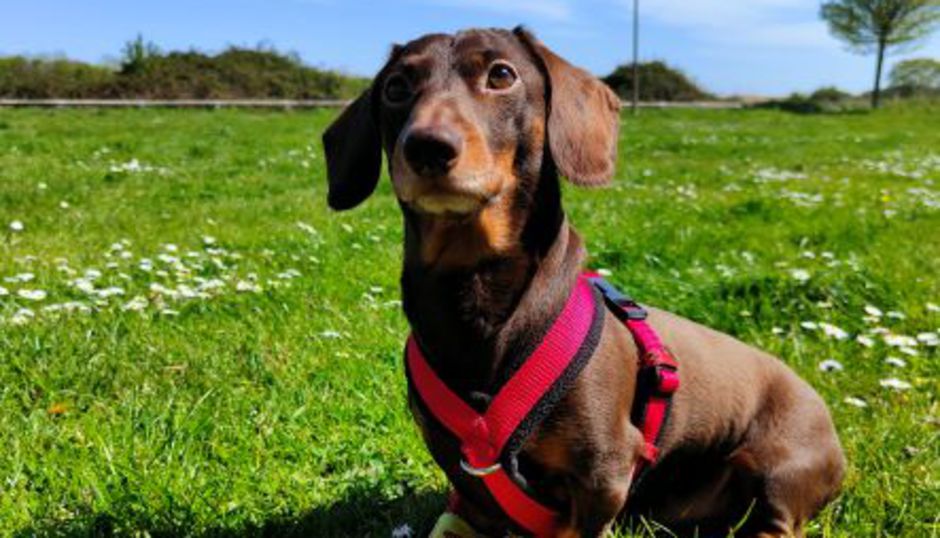 Our little Pigglyfairy Lincoln was diagnosed with Stage 3 IVDD on 21st March 2022 at 4 years and 2 months old.  His symptoms started on the Saturday 19th.  My partner and I had both come home in the morning from a trip out and as always he was so excited that we had arrived home.  He came running into the bedroom to great me and he instantly put his bum on the floor and then was reluctant to move and would not come any closer.

Through the day he was walking around ever so slowly and going out for his afternoon toilet break he was reluctant to walk back to our flat.  It was then I picked him up to carry him home and he made a horrible squeal.  It startled me and I instantly put him back on the floor.  My gut feeling straight away was IVDD although my partner did tell me not to assume the worst.

We made sure he rested throughout the day but he really was not himself.  We carried him out for toilet breaks but every time he was lifted he made that horrible noise.  It almost made you too scared to touch him.

We made an appointment for our local vets on the Sunday morning.  The vet checked him over for signs of IVDD.  He seemed to think that he had probably pulled a muscle.  He gave us some pain relief and sent us home advising us to crate rest him and told us what further signs to look out for in respect of IVDD.

That Sunday he slowly deteriorated and started to walk wobbly on his back legs like he was drunk.  I instantly knew then it WAS IVDD and I was absolutely mortified.  We took him back to the vet's that Sunday evening and the vet got us a referral for Monday afternoon.

By Monday morning he had just deteriorated more and was getting worse by the hour.  He was unable to walk or stand on his back legs and he was pooing without even knowing he was.   I decided instantly to contact my local vet's again to push the referral forward as I knew time was of the essence.

Unfortunately, the specialist was not able to fit us in any earlier so my local vet found another specialist being the Queen Mother Hospital for Animals Royal Veterinary College who told us to drive down immediately.

Due to Covid, they still were not letting patients into their waiting area and we had to wait in our car for someone to collect our little sausage.  It was heart-breaking watching them carry him away from us.  I stupidly didn’t even given him a kiss goodbye as I was in such a mess and just wasn’t thinking straight.  Honestly I have never felt so terrible in my life and the thought of him not coming back out again alive just broke me down.  The drive home was just all a blur.

That afternoon the surgeon did a CT scan on Lincoln and it showed that he had a protruding disc T12-T13.  Lincoln was still under anaesthetic and the surgeon telephoned us immediately to confirm the result of the CT scan.  She then got the OK from us and he went straight into surgery to have that disc removed.  We cannot fault our surgeon, she was absolutely lovely and acted so quickly.  She telephoned giving us an update about 10pm that evening after surgery to let us know how he got on.  Everything went well and as planned.  It was such a relief to hear this news but obviously we knew we still had a long journey ahead of us.

Over the next couple of days she gave me updates on how Lincoln was doing and he was doing well and even moving his legs although they were weak and he was toileting on his own.  We was so happy to hear this news.

On Wednesday 23rd the surgeon telephoned and told me he was doing really well and that she was happy for him to be discharged the next day.  I was totally panicked by this as I thought he would be staying in over the weekend.  Lincoln is a nervous little soul and doesn’t feel comfortable around strangers or other dogs.  She said she was totally happy for him to come home and recover in his own surroundings where he would be more comfortable.

He was discharged at 3pm on Thursday 24th March.  Wow, how nerve-wracking it was collecting him.  However I was amazed to see how strong he was on his back legs (although the surgeon did carry him out to us).  It was so nice to have him back again!!!

Well Lincoln’s recovery over the next couple of weeks was just amazing from the first day.  He was getting stronger on his back legs and you would not have thought he had spinal surgery.  It was actually a hard task trying to keep him calm when out on his toilet breaks, he just wanted to go go go!!

He had never been crate-trained as a pup so having him crated for so many weeks was a big worry for us as he is such an anxious boy.  Well he could not have made the process any easier for us.  He adapted so well to his crate and pen.  In fact we still crate him at bedtime and also when we go out as he seems to like in there and knows the deal.

Through the remainder of his recovery we followed the surgeon's plan and thankfully we did not have any setbacks.  He just got stronger and stronger day by day.  I must say the more things we introduced each week just made it scarier for us.  That first time off lead; WOW, were we nervous!!!  But he smashed it and was such a happy boy to have that extra freedom.

We now permanently have our sofa fenced off with the pen so he cannot get onto the sofa and he is no longer allowed on the bed (even though he did use stairs beforehand).  We just feel like it’s safer that way.  He always gets carried up and down steps too.

In July 2022 we had a family holiday to Devon and he had his first beach trip and charged around like nothing had happened.  He was soooo happy and it was so lovely to see.

I feel a lot more clued-up on IVDD now (even though I had researched it before we got him and I had even joined the Dachshund IVDD UK group on Facebook).

When we got Lincoln we kept him on a healthy diet with lots of exercise (on and off lead).  We also let him go on and off our sofa and on and off our bed with stairs to keep him nice and toned with good core muscles.  We even decided not to have him neutered because of the 50% increase in neutered males developing IVDD.  In our eyes we had cut it by more than half and stupidly thought we would be one of the lucky ones.  Well we weren’t in the fact that he did get IVDD but on the other hand we were very lucky in his recovery and I think that was helped by the fact he was such a fit and well-toned Dachshund.

It’s always a worry that it will happen again but we feel he needs to live a normal as possible life (just a slightly adapted one) and we will take each day as it comes.

Hopefully he has many many healthy years ahead of him and already he truly is an IVDD Warrior!!!!