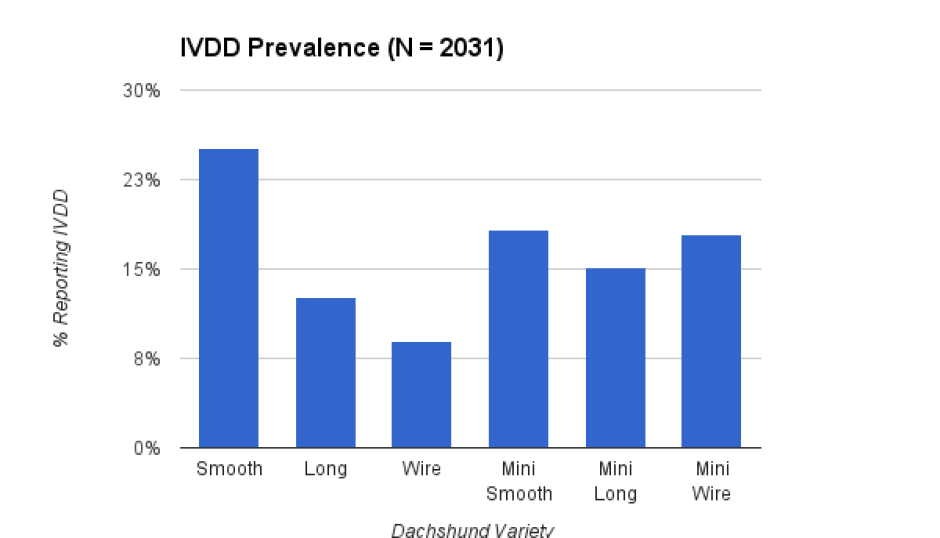 For those people interested in the research evidence of IVDD prevalence, we have summarised some findings of peer reviewed papers here.

Intervertebral disc disease (IVDD) is the most common spinal disorder in domestic dogs. IVDD represents a major problem in Dachshunds particularly, with the breed at a relative risk of IVDD 10-12 times higher than other breeds [2, 3], and 19-24% of Dachshunds are estimated to show clinical signs related to IVDD during their lifetime [3-6].
References:

These are obviously quite old references, but our 2015 DachsLife study reported the prevalence of IVDD in Dachshunds to be 15.7% (average across all 6 varieties and all ages), with the most commonly affected Dachshund variety being the Smooth-haired (24.4%).

Previous studies of IVDD occurrence in multi-breed populations have utilised insurance data e.g. Bergknut and colleagues (2012), who reported an overall incidence rate of thoracolumbar disc herniation at 3.5% in all breeds combined, but found much higher rates of 24.4% in Miniature Dachshunds and 13.0% in Standard Dachshunds.