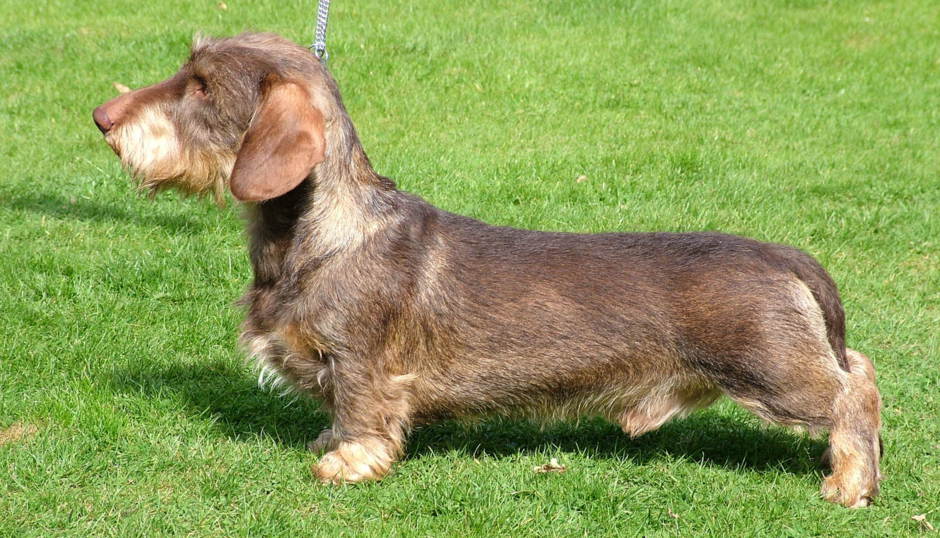 In 2013, Rowena Packer and colleagues at the Royal Veterinary College published a paper "How long and low can you get?" which suggested that the longer a dog's body and the shorter its legs, the more likely it is to suffer from back problems. She also found that dogs that were overweight were more likely to have back problems.

The General Appearance clause says... Moderately long in proportion to height, with no exaggeration. Compact, well-muscled body, with enough ground clearance, not less than one quarter of the height at the withers, to allow free movement. Height at the withers (C-D) should be half the length of the body, measured from breastbone to the rear of thigh (A-B).

Why Dachshunds have short legs

Man and dog have been working together for a very long time.  Archaeologists have found bones that appear to be from domestic dogs dating from 15,000 years ago, but genetic research suggests that the split between the dog and the grey wolf started about 40,000 years ago.

There were about five separate times when the wolf came into the dog’s family tree, but by about 14,000 years ago the dog was probably very much a domestic animal, although they may still have looked a lot like wolves (Parker, 2010, Savolainen, 2002).   Indeed, there are some dog breeds around that still look very wolf-like, even today.

About 10,000 years ago a mutation occurred in one puppy that fundamentally changed the shape of this animal and its descendants. This puppy was the ancestor of all the short leg dog breeds to be seen in the world today.  This puppy had a duplicate, but somewhat abnormal, copy of a gene that codes for a growth-promoting protein called Fibroblast Growth Factor 4 (also known as FGF4) (Parker, 2009).  This growth factor is important in determining when bones stop growing.

The mutation caused a form of dwarfing with short legs but a normal head, chest and body.

If it had been in the wild, the disadvantages of the short legs – smaller, lack of reach and maybe speed – might have proved the end of the dog with the original mutation, although it might just have been lucky.  Whatever the situation, it was a parent of at least one litter, and the mutation survived and has been passed down to us.

Dogs had been domesticated for at least 5,000 years when the dwarfing mutation happened, although we don’t, of course, know if the dog with the mutation actually lived with humans.  It survived with this abnormality, though (obviously), which may have been due to it being in a ‘domestic’ environment.  From the human point of view, dogs with short legs would be useful in getting through dense undergrowth or for chasing game down holes, so there would have been advantages in retaining these dogs for hunting.

Thus, it can be seen that Dachshunds actually haven’t got long backs, they have short legs. They are described as a Chondrodystrophic or Achondroplastic breed. 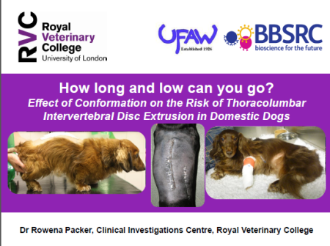 Research into conformation and IVDD:

Conformation and body condition (excess bodyweight) have been implicated as risk factors for IVDD. Increased back length relative to height at the withers (BLHW) has previously been associated with an increased risk of disc extrusions [1].

In addition, Dachshunds with relatively longer backs showed the most severe clinical signs when affected by thoracolumbar IVDE [2]. Conversely, in a study of disc extrusions and protrusions, affected dogs were taller at the withers (as an absolute measure) and had a significantly shorter T1-S1 distance [2].

Although not yet investigated, diet may have an effect upon IVDD either via increasing bodyweight (in terms of calorie consumption), or as an independent effect upon disc degeneration (in terms of nutritional value) and requires further investigation.

Miniaturisation (smaller body size) has been associated with disc extrusions, which is of particular relevance to the three Miniature Dachshund varieties (Smooth, Wire and Long Haired) [1]. Finally, larger pelvic circumferences have been recorded in IVDD-affected dogs, and shorter tuber calcaneus-to-patellar tendon distance were recorded in affected than in unaffected dogs [2].

Previously reported associations with conformation were not found in the DachsLife 2015 population (3).

(1) Packer RMA, Hendricks A, Volk HA, Shihab NK, Burn CC. How Long and Low Can You Go? Effect of Conformation on the Risk of Thoracolumbar Intervertebral Disc Extrusion in Domestic Dogs. PLoS One. 2013;8(7):e69650.