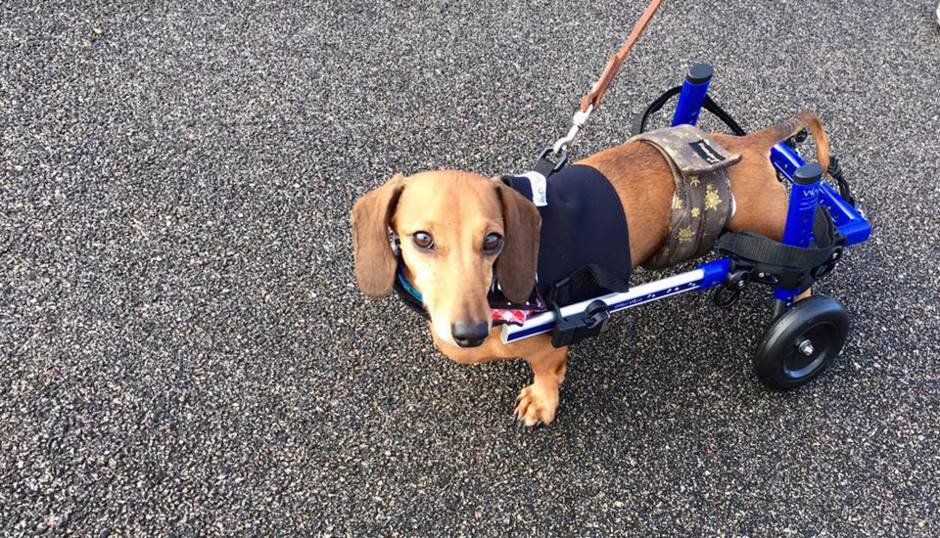 Elaine Brechin runs Dachshund Respite Care and wrote to tell us about Ernie, a 5-year-old Dachshund who was paralysed with IVDD.

I first came across Ernie on one of the Dachshund Facebook pages. His owners were looking at rehoming him due to his significant disabilities after coming down with IVDD in April 2016.

Dachshund Respite Care was in its early days and I offered the owners an opportunity to bring Ernie to us for intensive round the clock care in the hope that we could help him rehabilitate to gain some mobility and control over his bladder. 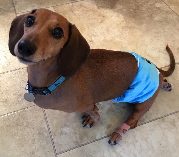 On day 2 we took him to Tracey Jones at Fusion Vet Physio and started his rehabilitation in earnest. Tracey examined him and found neurological deficits associated with spinal cord dysfunction and weak flaccid gluteal muscles.

We were given an exercise sheet to enhance strength, balance, massage of his hind limbs, toothbrush vibration to the hind muscles and exercises to improve his motion and proprioceptive awareness. He was unable to stand and required to be supported all the time whilst he did his exercises 3 to 4 times a day and, for toileting purposes, he was supported with a sling.

To improve his continence Tracey gave him biweekly laser, laser acupuncture and loaned us a biomag mat which improves nerve regeneration and this was placed under him, whenever he was at rest.

All this continued over a couple of weeks and soon he could support himself and managed to stand for a few seconds. Gradually he became stronger and started having hydrotherapy whilst continuing with the exercises and other therapies.

We did some research on supplements and found one used in the US called Vetri Disc and were sent a tub over to try. Probably just coincidence, but within a few days, Ernie took his first steps! We added in other exercises to help improve his muscle tone and a homemade wobble board to help with stability. Over the last couple of weeks, he has continued to stand and take steps on his own.

We started a Fundrazr for Ernie to pay for equipment and the chance to get a specialist opinion. We bought him a set of wheels, drag bag and gingerlead. He took to his wheels almost immediately and his face lit up with his new found freedom.

First time on the gingerlead and he managed to walk about 50 yds placing his paws without knuckling. To this day he continues to stand and walk unaided for short periods and the length of time is gradually increasing.

We will continue with the exercise plan, increase the hydrotherapy and the length of time on his gingerlead, increase the time in his wheels mainly whilst his hind limbs are free to touch the ground to improve placement.  As he is improving day by day we remain hopeful that at some point he may regain enough mobility to walk unaided.

How Ernie found his forever home

Dachshund Respite Care was in its early days and I offered the owners an opportunity to bring Ernie to us for intensive round the clock care in the hope that we could help him rehabilitate to gain some mobility and control over his bladder.

After taking time conversing with his owners, Ernie came up on the 13th August 2016 and it was agreed that we would keep him on a month to month basis depending on his progress.

Ernie soon made improvements and we were regularly in touch with his owners. By September his owners decided that although he was better they couldn’t give him the care and attention that he still needed and the sad decision was to again look at finding him a new home.

We posted his details on various dachshund Facebook pages and were delighted by the responses. We were in contact with a few prospective owners but, unfortunately, once they knew the potential financial burden and care that he needed most realised that Ernie wasn’t the dog for them.

At the time, we were so busy with Ernie’s care and the rehoming process that we put the idea of being his new owners at the back of our minds. Also, the licence conditions of Dachshund Respite Care allowed for 3 dogs at one time and, as well as Ernie, we had our own 2 girls, one a 17-year-old mini wire who needed her time and attention due to age and illness.  Consideration also had to be given to the next boarder being another “Ernie” and that he/she may also need the same care and commitment.

Eventually, we found a new prospective owner, but it became quickly clear on taking a step back to think, that we had grown very attached to Ernie and everyone agreed that the upheaval of a new home could be detrimental to his recovery.

It was then that we decided that Ernie was more important than the business and, if needed, we would cease Dachshund Respite Care so that we could continue to work towards his recovery and that this now is Ernie’s forever home.