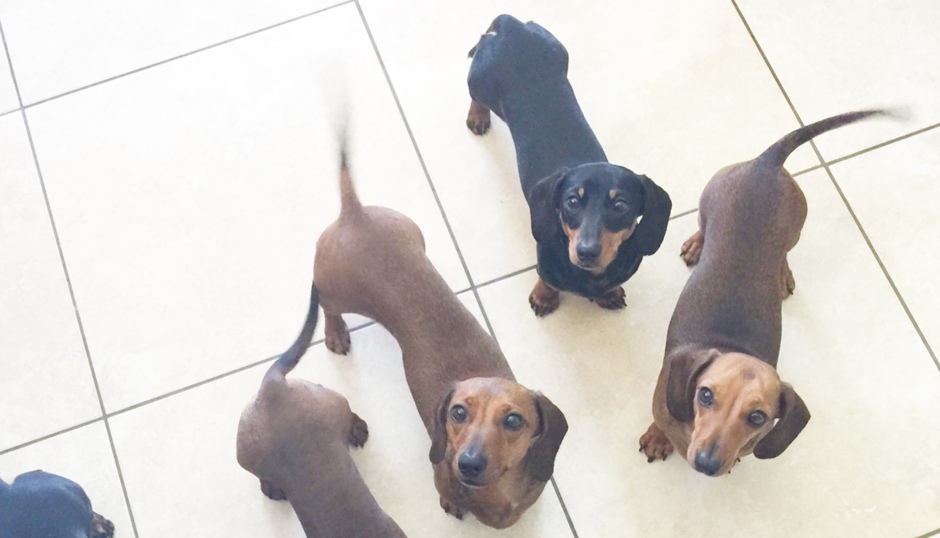 Our 2018 Health Survey also found the same association between early neutering and increased IVDD risk. In our DachsLife 2018 survey we found:

Further evidence of this association was reported in 2018 in a peer-reviewed paper: Neuter status as a risk factor for canine intervertebral disc herniation in Dachshunds.

This does not mean there is a cause and effect relationship between neutering and IVDD, but it has some parallels with a study of Golden Retrievers that showed neutered animals were more likely to suffer from Hip Dysplasia. Although the mechanism for this is not clear, it is easy to hypothesise about the effects of early neutering on bone and muscle development when an animal is not fully mature. This is discussed in the 2018 paper.

There is a body of evidence emerging that neutering (and early neutering in particular) has more disadvantages than advantages.

Be very cautious of making a decision to spay or neuter your Dachshund, particularly before the age of 12 months.

Read more about whether or not you should spay your bitch, or neuter your dog.

There are lots of useful links to research into the pros and cons of spaying/neutering on the "You did what with your wiener" website.

For Dachshunds neutered under 6 months, the % with IVDD is greater than for entire dogs at all ages. Of the 4 year old Dachshunds in our survey who had been neutered under the age of 6 months, these were 12 times more likely to have suffered an IVDD incident than entire Dachshunds. When they are neutered over the age of one, there is still an overall higher proportion of neutered dogs and bitches with IVDD, but the difference is less than in the case of early-neutered animals.

25% of 4-5 year old Dachshunds in our survey that had been neutered under the age of 6 months had suffered an IVDD incident compared with 7% of entire Dachshunds. 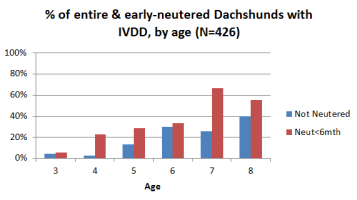 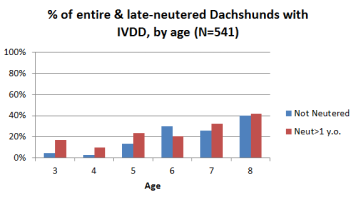 The following two charts show the differences in IVDD percentages of Dachshunds in our 2015 Survey for (a) dogs aged 4 and (b) dogs aged 8. You can see that, by the time a dog has reached 8, the impact of neutering has reduced compared with the 4 y.o. dogs. There's a shockingly high proportion of 8 year old Dachshunds that experienced an IVDD incident, irrespective of their neuter status. N.B. this data is ​dogs and bitches combined. 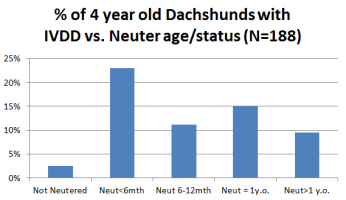 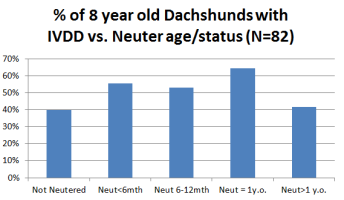 A 2020 paper by Hart et al looked at the evidence to support decision-making on neutering. Lead author Dr. B Hart wrote to us to say:

Thanks for sending your paper. Although the two studies are not the same, I see similar results. In our study we saw the greatest risk in IVDD in females neutered at 6-11 mo. compared to intact females. As personal advice, I suggest neutering both sexes beyond 12 mo.