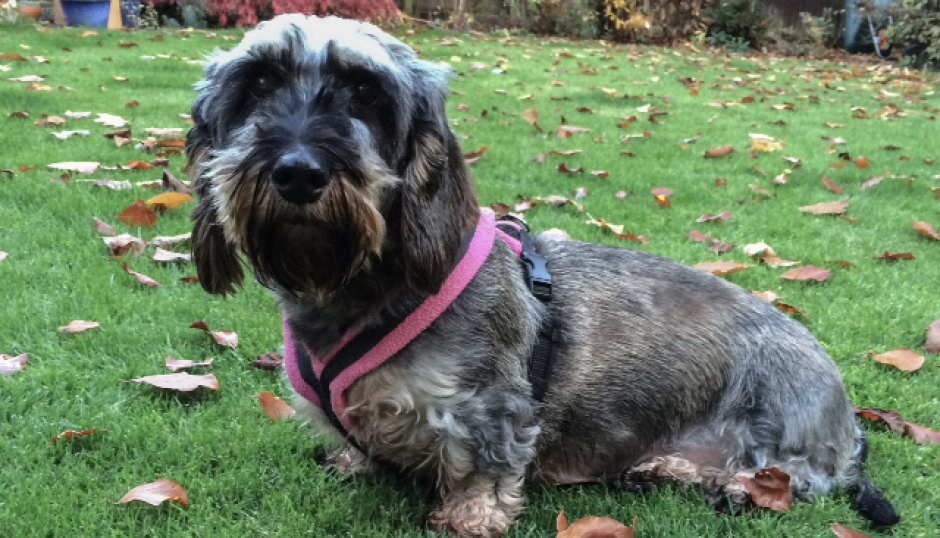 Flossie, our standard wire, has Intervertebral Disc Disease (IVDD).  We were initially unaware that she was showing signs of that condition.

The first indication that there was anything wrong was two years ago when she was on a very long walk on heathland: she seemed unusually tired and kept lying down to rest every few minutes.  It was, however, a very hot day, and assuming that she was getting overheated, we let her cool off in the river, after which she seemed OK.

A few weeks later she suddenly became extremely distressed one evening – she kept pacing up and down and started shaking.  She appeared to be holding herself tense and, when I stroked her and felt along her body in an attempt to ascertain what was the matter, it seemed that she was holding her abdominal muscles rigid, and my first thought was that she might have some sort of acute abdominal problem, such as ‘bloat’. We phoned the emergency vet and drove Flossie to their emergency centre about half-an-hour away.

By the time we got there she had improved considerably and, having been told the history, the vet examined her but could find nothing obviously wrong.  This was, of course, quite a relief, and we assumed that whatever had caused the problem had resolved.  We have since learned that pacing around, walking with the body hunched, and a tense abdominal wall is, in dogs, a typical presentation of acute back pain.

Three months late, during a Friday afternoon, she began to show the same symptoms: shivering, pacing, and holding her abdominal muscles tensely. A visit to our usual vet also revealed tenderness over the middle section of her backbone, but no obvious weakness of her hind legs or tail.  She was admitted over the weekend for strict crate rest, pain relief, and observation, with a provisional diagnosis of a back injury that was probably muscular.

Unfortunately, the orthopaedically trained vet at our practice was away on annual leave. On the Monday, an X-ray was taken, and we were told that it showed no obvious abnormality.  Flossie was obviously still in pain, and we were offered a referral to an orthopaedic centre, but our vet didn’t feel it was necessary, as Flossie was stable (and actually appeared to be improving slowly. She also told us that she didn’t know of any local orthopaedic referral centres (presumably because they had their own orthopaedic vet) and that, should we want to take up that offer, we would have to tell her where to make the referral.  Their orthopaedic vet was back at work in a further four days, and her recommendation was that Flossie should remain at the vet’s until he saw her. There is no-one present overnight at our vet, so Flossie was alone, unobserved, from 10.00 pm until 07.00 am during her stay. 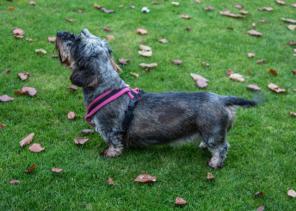 I visited her every day, a visit that was very distressing both for her and for me. The nurses kept telling me that she was improving and would get home once the orthopaedic vet had seen her.

I was given an appointment with him on the Thursday morning, in the expectation that I would then be able to take Flossie home.

At that consultation, I was told that he was very concerned about her condition, as he thought she had a prolapsed intervertebral disc. As soon as I had given consent, he intended to carry out an emergency myelogram (an x-ray of the spine using a radio-opaque dye to show up the vertebral discs) that would almost certainly be followed by immediate surgery. I was also told that any excitement might trigger paralysis and, because of that risk, I was not allowed to see her beforehand.

A telephone call later confirmed our worst fears – the myelogram showed two prolapsed discs in her lumbar spine and he was going to operate immediately.  In addition, he would carry out a drainage procedure on three adjoining lumbar discs as a preventative procedure to stop them prolapsing in the future.  After three further days as an inpatient, Flossie was allowed home for six weeks crate rest and convalescence.

Following the operation we noticed that there was some weakness of her left hind leg and her tail, which may have resulted from either the disc prolapse or the surgery, as nerve damage is a recognised possibility during spinal surgery.  We were, however, told that no physiotherapy or other specialist rehabilitation was necessary, and that we should simply gradually increase her exercise.  We were also informed that, if any weakness should still be apparent after six weeks, it was extremely unlikely that there would be any further improvement.

It took Flossie 12 months to get back to some resemblance of normal exercise tolerance and ‘bounciness’, but the slight weakness in her tail and back leg remained.  We felt very lucky that the weakness was only minimal, and had been told by the vet that, because he had carried out preventative surgery on her other lumbar discs, she would have no further spinal problems.

How wrong he was, and how naïve we were.

This autumn, on a Saturday morning, I collected Flossie from a two week stay in our excellent and very caring kennels.  She came bounding out as usual, pulling on her lead like mad, and then suddenly squealed with pain.  She then started shivering again and carried on shivering in her crate during the drive home. Once home we walked her up and down, but could see nothing wrong and she seemed to improve during the day – she wasn’t herself, but we put that down to our recent absence and her stay in kennels.

Early on the Sunday morning we were woken by her squealing, and found her extremely distressed, panting, and in obvious pain.  An immediate visit to the emergency vet resulted in an urgent transfer to the Fitzpatrick Neurology and Orthopaedic Referral Centre (the TV ‘Supervet’) who, luckily, is situated only half an hour’s drive away from us.  There she had an emergency MRI Scan under anaesthetic (the investigation of choice) which showed that she had sustained another disc prolapse, this time in her cervical vertebrae (neck).

Luckily, as the bulge in the disc was central, thus not causing major pressure on the nerves (which come out of through the vertebrae on either side), and she was showing only minimal weakness, it was decided that she did not need immediate surgery, but should be admitted and kept under close observation. She was, however, in so much pain that she required regular morphine to control it.

She was kept in for three days, during which time she received regular laser physiotherapy. 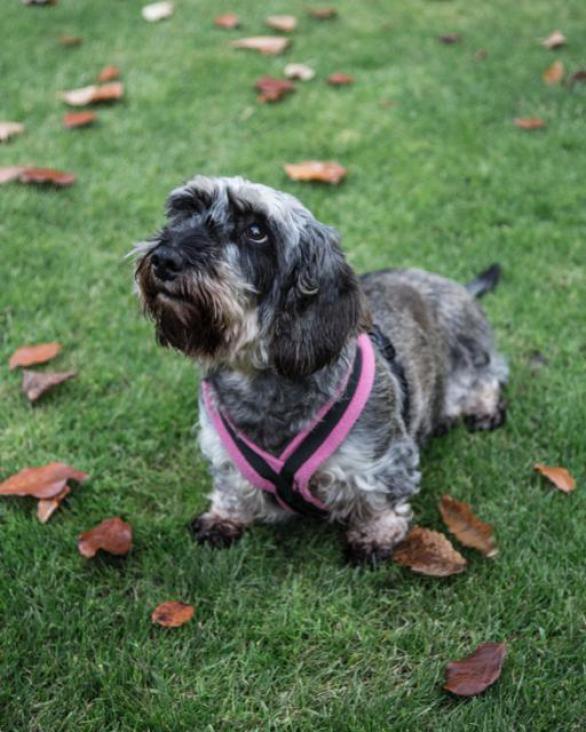 Currently (the beginning of November 2016) she is doing well on crate rest, twice weekly laser therapy at the physiotherapy department at Fitzpatrick’s, and regular strong pain-killers and anti-inflammatories.  They have told us that she will be at risk of further disk prolapse for the rest of her life, and that we must never risk any pressure on her neck from a collar, but must always use a body harness, In addition, she has to use a raised feeding bowl, and must not be allowed to use stairs (she never has) or jump on or off furniture or similar.

Flossie has been very fortunate, in that she has avoided full-blown paralysis. We were particularly fortunate on the more recent occasion, in that she was seen so promptly by an expert, and his having such superb aftercare.

From our discussions with the staff at Fitzpatrick’s they have highlighted to us that in dachshunds (and many other breeds) back pain is an acute medical emergency that can rapidly progress to nerve damage and permanent disability.  Early signs of disc prolapse can be very deceiving and may mimic other conditions.  That is particularly true of abdominal wall tenderness, as they tense their abdominal muscles to reduce movement in their back. The possibility of a disc problem should always be considered in a dachshund with apparent abdominal pain. Once there is any sign of muscle weakness or paralysis, conservative management has no role to play until the need for emergency spinal surgery has been properly assessed, probably by MRI or similar. Once there is any evidence of paralysis there is a period of about 24 hours during which emergency surgery may be fully curative, beyond that it is far less effective.

IVDD is a very real problem in the modern-day dachshund. Every day that we have visited Fitzpatrick’s hospital we have met dachshunds of all sizes and coats in the car park showing various degrees of paralysis and recovery.  The physiotherapy staff have told us that they see approximately four such dachshunds every day.

It has saddened us deeply to see this, and we strongly support the work of the breed health team in their endeavours to understand this condition and work towards early diagnosis and preventative breeding in the future.

In conclusion, we would emphasise the following points: