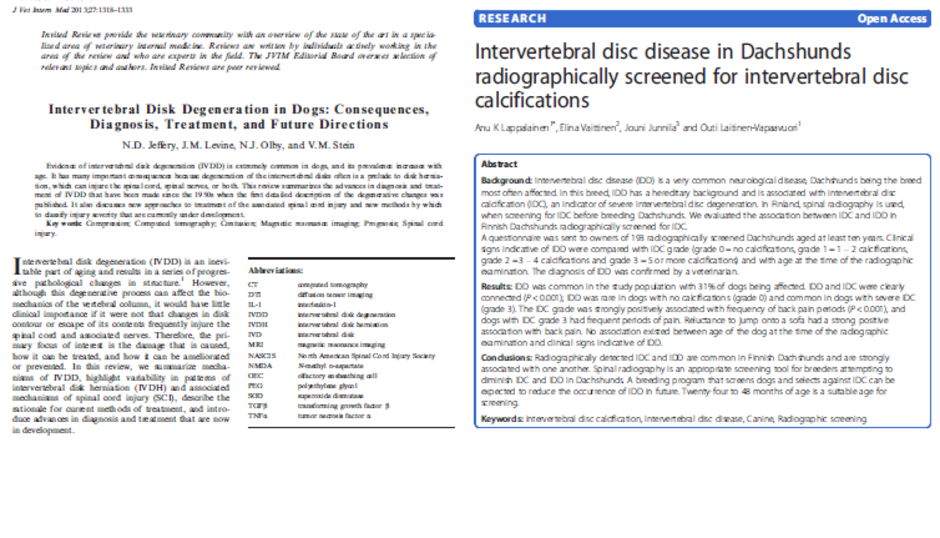 The following abstracts are from papers that are not Open Access.

To determine the incidence and distribution of intervertebral disk (IVD) degeneration-related diseases in a large population of dogs of various breeds, ages, and sexes and to determine mortality rates among dogs with these diseases.

Differences in incidence rates among various breeds suggested a genetic involvement. Knowledge of the distribution of IVD degeneration-related diseases among dogs of various breeds and ages may facilitate early diagnosis and preemptive treatments in patients at risk for developing these diseases.

Quantification of the association between intervertebral disk calcification and disk herniation in Dachshunds.

To quantify the association between intervertebral disk calcification and disk herniation in Dachshunds.

61 Dachshunds that had been radiographically screened for calcification of intervertebral disks at 2 years of age in other studies. Thirty-seven of the dogs had survived to the time of the present study and were > or = 8 years of age; 24 others had not survived.

Radiographic examination of 36 surviving dogs was performed, and information on occurrence of disk calcification at 2 years of age were obtained from records of all 61 Dachshunds. Information on occurrence of disk herniation between 2 and 8 years of age was obtained from owners via questionnaire. Associations between numbers of calcified disks and disk herniation were analyzed via maximum likelihood logistic regression.

In a population sample comprising 48 standard wirehaired dachshunds, the occurrence of intervertebral disc calcification was determined by plain spinal radiography. Body dimensions of the dogs were measured and information obtained from owners about exercise patterns, including stair climbing, and the relation of these variables to the number of calcified discs was analysed by logistic regression. In the Danish population of wirehaired dachshunds, the prevalence of disc calcification was estimated at 77%. The spinal distribution of calcified discs is similar amongst different populations, while the prevalence varies significantly. Most types of exercise included in the variable 'duration of exercise' as well as moderate stair climbing seemed to reduce the rate of occurrence of disc calcification. The effects of moderate stair climbing (OR = 0.34) and duration of exercise (OR = 0.52) were statistically significant and the effects appear to be additive. Running next to a bicycle was the only type of exercise with a positive association with the number of calcified discs. This was, however, not significant. Effects of body conformation, including absolute and relative body measurements, were not found.

Inheritance of disc calcification in the dachshund

The occurrence of intervertebral disc calcification was investigated by conventional spinal radiography in eight families of wirehaired dachshunds, with each family comprising one sire, two dams and one litter from each dam. Each offspring was examined radiographically once at 24-35 months of age. The occurrence of disc calcification was rated according to four different scales. A strong correlation was found in the occurrence of disc calcification between offspring and mean parent (P < 0.001) and between offspring and dams (P < 0.005) on an either/or scale. Statistically significant estimates of heritability of 0.60 and 0.87 were found based on the offspring-sire relationship using the total score and three-class scale, respectively. Higher correlation estimates were found based on the dam-offspring relationship than based on the sire-offspring relationship, suggesting an effect of maternal environmental factors.

Calcification of intervertebral discs in the dachshund: a radiographic study of 115 dogs at 1 and 5 years of age.